Assassin’s Creed IV comes in just behind AC 3 with respects to timeline in the world that is Assassin’s and Templars. Seeing the success in AC 3’s pirate theme made available, Ubisoft decided it was time to take a little side adventure in this world and have fun with whatever awesome could be made with pirates, pirate ships, and the all the hostilities one can think of in the life of a pirate. You will play as Edward Kenway and you will be leaving your girlfriend back in the hood, the hood being the United Kingdom, and in search of major riches that only can be acquired through the means of being a pirate.

In past Assassin’s Creed games, the first hour or three really is the in game tutorial process and for veteran players this can be somewhat of an annoyance. Ubisoft decided it may make sense to just cut that process down by about half and get you into the action right away. As Edward, you will happen upon an Assassin during a battle between two ships where in the end of your meeting, you end up with the iconic wrist blades and appropriate assassin attire. From there the story continues on into which you will end up questing for something called the Observatory. Without giving away the plot line, we will leave it that at the end of the game, there is going to be a “ah ha” moment.

Edward already has the fabled abilities of an assassin because of his lineage that is implied through the outside first person portion of the game. No, you will not be playing as Desmond Miles, but instead be playing as another person for Abstergo Industries who in short is “researching” history of various people and capturing those events to be recreated as a movie for the public to watch or play. Honestly I liked the Abstergo tie with Ubisoft directly in the game because of the various little elements around the world showing previous Assassin’s Creed title boxes lying around the office as well as notes discussing the history of Abstergo and Ubisoft. Unlike the previous games with Desmond, there isn’t a big outside pirate world/real world interaction. Meaning you can do a few little side things here and there when requested every few hours of the games storyline, but you won’t get really lost in it. It’s obvious you will be meeting up with characters from the past games within the real world timeline, but it isn’t made apparent or thrown in your face. Newcomers will be oblivious to it.

Getting back to pirate activities, once you complete your bit of in game training, you really have all the free will to do whatever you want to do. You will travel from various places by your ship, the Jack Daw, and as always with any sort of sandbox game, get immediately sidetracked by all of the little things you can do along the path as you travel from mission to mission. You will encounter a lot of legendary pirates along the way and admire a few of them as well. Whether it is Captain James Kidd or Blackbeard, one of the most feared and fabled pirates of the time. You will be given a lot of history in this game, which is a good thing if you remember any of your world history from school because it shows you that Ubisoft really did do its research. Your main area of work will be within the Caribbean region and even then most of it within Nassau or Havana. Your side mission will find you attacking ships in the middle of the ocean to collect their loot, scuttle, or even commandeer the ship to be used in your own fleet for side missions. These side missions are honestly, a lame little side game for you to earn extra currency via a mini game that is rather subpar and, ultimately, shouldn’t have been in the game. It really is a waste of time, but I have a feeling Ubisoft was like “well, we have all these ships, what do we do with them if capture!?” That was their solution. Fair enough, but it sucks.

Besides killing ships, looting wrecks, or diving under water to loot sunken ships while not being eaten by sharks and moray eels as you look for treasure and attempt to not drown by getting air from sunken barrels, you can also find many places on land to explore. As you sail about the available world, you will come across many different little islands with treasure boxes and animus fragments on it. Which, now that I recall, I collected those damn things and still haven’t a clue what they were used for? While the little islands are very small, you will come across larger and larger masses of land. Sail up next to a small pier infested island that has a few settlers on it and of course tavern to a much bigger island that will take you longer than just a few minutes to explore. One of the major advantages that Ubisoft put into play is that each time you synchronize from the many places on the map; they can be used as fast travel points. This is wonderfully executed because traveling from one side of the map to another straight through without being distracted by all of the activities given to you along the way, is time consuming. On land missions are the same in all of the AC games and you get a new weapon this time around. The Blowpipe takes place of the throwing knives and allows you to shoot darts that make the victim go berserk or knock them out for a little bit of time.

One of the major difficulties we had while playing on our Xbox 360 was when climbing up structures, there would be spots that you would just stop and be unable to move up over. This proved to be an issue if you were being chased by guards who could shoot you and if you were at the edge of a roof about to get away, you would fall to the ground. It was very frustrating at times. Sailing on your ship as we mentioned earlier was pretty much taken wholesale from Assassin’s Creed III, but is much more refined and manageable. More improvements can be made to your ship along with decorative niceties to make you look even more domineering on the open ocean. One of the best new weapons available are mortars that allow you to hail fiery death on ships in the distance or island based forts that you can bombard into submission. That is of course they beat you to it first and send you to the bottom of the ocean.

AC IV BF is a welcome break from the main play of the game and setting from past games, something that you could tell was coming from AC III.  It will be interesting to see where the next AC game comes into play, especially on the new consoles released and the horsepower that they offer. I would prefer to see the series slow down with the features because I would rather take a couple of really nice items crafted well instead of a bunch of features just jammed in to make sales. I doubt that was the full intent of those designing the game, but that is the slight impression I received. I left the game with many additional features to play on so I have a feeling I will be going back to it to collect more of those darn animus fragments just because I can as well as to find one of the last missing keys needed for an upgraded Assassin’s suit that I still didn’t have the opportunity to wear. 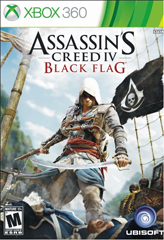