The past couple of weeks has been full of gaming related goodness. One of those is the chance to check out and get our spy on with Tom Clancy’s Splinter Cell Blacklist by Ubisoft. While there is no Michael Ironside to play the voice of Sam Fisher, Eric Johnson fills the iconic voice role and he works out well for the job. With a new voice comes a new way to do things with the game along with many additional features for upgrading Sam and his gear. If you’re on the fence thinking this is just another in the series for the game, read on as we do not think you will be disappointed.

Without giving away too much about the plot of the game, Sam and the rest in a newly formed unit, 4th Echelon, will be pitted against a group of terrorists that call themselves the “The Engineers”. They have created a list, “The Blacklist”, which is a series of attacks on American soil and interests. It would be easy to stop the list from being executed if the US would bring their troops home, but for starters, the US doesn’t like to be told what to do, and also we wouldn’t have a game. The old ways of doing things when it came to Splinter Cell was all about the stealth aspect of the game. Ubisoft gives you that option to complete a mission, but also allows you to go about finishing it pretty much anyway you want.

If you are a Splinter Cell fan, then you will know that when Conviction came out, one of the nice things added was the ability to approach the mission through various paths. It was a good first try at it and it has been significantly polished in Blacklist. You have a huge map to navigate through and it has been impeccably detailed. With all of that room, Sam has all the options in the world to progress from point A to point B and not be restricted like it was in the past. Because of this new found vastness, each mission now is pretty much unlimited in the ways it can be completed, especially when it comes to your play style.

If you head into a mission with the desire to not be seen at all, you can approach it like a Ghost. Nobody sees you coming and nobody sees you going. Assault style is on the other end of the spectrum in which you come in guns blazing killing everything in your path. However, Ubisoft also realized there are times when you want to be stealthy, but also have the need to stop waiting for the AI to move a character around for the perfect stealthy take-out and just shoot someone. Panther style is the answer to that. At the end of each mission, a ranking and score is given showing you each of the above categories and how much of each of those you did.  With daily challenges presented to you via your friends online or from Ubisoft themselves, the replayability on each mission is high. Completing these various challenges and missions offers you in game reward money, which allows you to buy and upgrade your arsenal.

With the upgraded ways to take care of business, Sam has a lot of new gadgets to play with and with each of these new gadgets, they are upgradable making everything that much more enjoyable. You still have the iconic night vision goggles as part of your equipment, but you can now modify the goggles to different levels of accuracy and power. And if you are tired of that cruddy night vision green on your head, why not go for a blue, violet, or even pink aesthetics. Upgrading your guns is also a nice little feature. Allowing for customization of the way each gun fires with different ammo types, scopes, and handling upgrades, no longer will you need to fire multiple rounds into a rather tough bad guy with that pistol. Either enhance it, buy another strong pistol, or whip out your secondary weapon. Sniper rifle or shotgun, they can all be bought and upgraded for an even more powerful Sam Fisher. Don’t forget that Sam’s clothing is upgradable as well. From his gloves to his boots, you can increase his ability to handle weapons better and be even more stealth like. Reaching the max on everything, while expensive, makes for a super elite and stealthy killer. Just what we like.

In addition to the main missions that you will play, you can also interact with your in game counterparts to take on side missions. These side missions, while rewarding you with money for upgrades, also allows for you to bring in your real world friends for some extra co-op fun. These missions do not affect the main storyline, but if you want to take a bit of a break and go off and try to make perfect scores in other levels with your buddies, this is the way to go. And of course what better thing is there to do then to play multiplayer. Blacklist does not disappoint with this. Spy’s vs. Mercs is probably set up to be one of the finer of the Splinter Cell multiplayer series. Take the side of the Spy team and you will need to hack three computer terminals while trying to not die to the first person view of the Mercs hell bent on making sure you don’t succeed. As you should expect, the Spy’s are agile and can climb pretty much anything the game that will allow you to get a handhold. Being that fast has a disadvantage though because the Mercs are armored masses that can take a few rounds to the body without flinching.

These days, it seems that when you pay your $60 dollars for a game, you end up with a single player campaign that was cut short to make you buy more content just to finish the story you should have had to begin with. Blacklist is quite the opposite in that you get a huge amount of replayability, a fantastic set of co-op and multiplayer experiences, and massive choices for in game upgradability, Ubisoft truly out did themselves this time. This game is money and time well spent and deserves to be in your gaming collection. 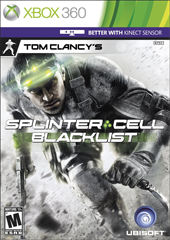